My last day in 2013 would take me into the Peak District, heading for Matlock. I came back the following April to head into the Dark Peak and over Kinder, Bleaklow and Crowden.

The boundary between Dark and White Peak is marked by the Hope and Noe valleys – roughly, between Castleton and Edale.

In the White Peak, my route included the Limestone Way in its entirety.

In the Dark Peak, I renewed my acquaintance with the Pennine Way. It’s pretty much impossible to miss, if you’re heading north along the spine of England – and it’s such a good route, why would you want to?

My aim was always to reach my sister’s house, on the edge of the West Yorkshire Moors. Guaranteed free accommodation, too good to miss.

Back to The Midlands

It’s a stiff climb out of Mayfield back up to the Limestone Trail, my guide through the White Peak, enlivened though by the views west over the Dove valley from the vicinity of Marten Hill. The River Dove is to remain an influence at least as far as Tissington; indeed, it’s only after Parwich that the Limestone Way will cease to be a continual up-and-down into its side valleys and, at the magnificent old Coldwall Bridge, the river itself.

Looking east across the Dove valley from Marten Hill

Thorpe is a lovely little village, dominated by the Peveril of the Peak, once a hotel, now base for the Holiday Fellowship and its walking groups; Tissington, though, is an aspic village, preserved for the gods of Heritage, to remember the old days of master and servitude. I had planned my mid-day break here but felt not a little out of place in the National Trust café. 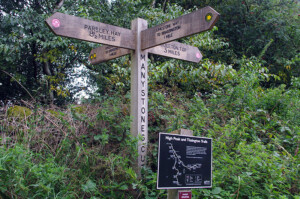 Outside Tissington, the Limestone Way crosses the Tissington Trail, a shared-use path that takes the trackbed of the old High Peak railway.

As mentioned on the Midlands page, this section was limited to three days as I was unsure how my achilles would hold up. Very well, as it happens. Not so the attached calf. I’d felt some twinges the day before, and they recurred in the morning; I was not unduly worried till the afternoon, when ‘twinge’ became pretty much the usual state of things, notably after Parwich. Not to help matters, rain set in soon after Brassington.

For a while after here, contemporary quarry workings – mostly, the Peak District boundary has been tweaked to exclude them, as at Grange Mill – provide much of the interest, but pride of place should go to the old (abandoned mid-19th century) Bonsall Mines, pockmarking bleak moorland.

By now it was a case of dragging the left limb through the drizzle and rain as best I could. If I had but known, a few minutes’ earlier arrival in Upper Town would have meant I could have caught the last bus of the day back to Matlock – an allowable privilege, as the last couple of miles are on a Limestone Way spur, a slippy uphill on limestone sets followed by a lengthy grassy descent. But I still had time for a couple of hours in the local Wetherspoons getting dry before limping to the station for the train journey home.

Back on the Limestone Way, using the bus instead of the spur to haul me back up the hill. On a pleasant day, it was a joy to be back in springtime wild flower meadows, distant views north over the Derwent valley.

Not many walkers about though; I met the first little group, of four and a dog, on the climb up to Robin Hood’s Stride north of Elton – they were walking to Monyash too, it happened. Though I overtook them, I promised they would catch me up, as indeed they did in Bradford Dale, the first of several deep valleys that characterise the northern part of the White Peak. The dale is marked by a series of dams dating from the 1890s, that create trout pools. 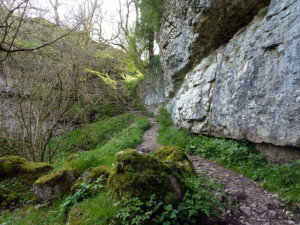 It’s a steep climb back out onto the plateau, before a drop into and out of Cales Dale, a side-valley of perhaps the most impressive of all the Peak’s dales, Lathkill Dale. Though it would have been shorter to have taken Lathkill Dale almost directly to my campsite, I stayed with the Limestone Way to Monyash.

I woke just after midnight to see all of the stars of the heavens turning across the night sky; and again two hours later, to feel the weight of oppressive damp cloud. Friday dawned gloomy indeed. The tracks to Flagg weren’t too bad a way to start the day, but thereafter there’s a fair batch of arrow-straight road-walking high onto the limestone plateau, drizzle now setting in. Things (though not the weather) start to change with a pretty green lane descent into Miller’s Dale, with its two great abandoned railway viaducts a stark reminder of the industrial age – though the B road through here is far busier than the A6 just a few miles before.

There are, thankfully, two great dale systems to enjoy before the Limestone Way ends. The first is the Monk’s Dale system, in particular Peter Dale and Hay Dale, both relatively shallow but charming nevertheless. After the day’s 1500ft high point, the majestic groove of Cave Dale leads steeply into that tourist honeypot of Castleton, Peveril Castle dominating the romantic view. 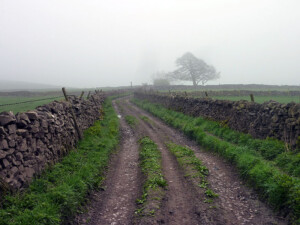 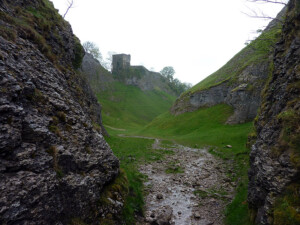 The Limestone Way ends at Castleton: another trail ticked off. The task now was to get a cup of tea, and then cross over to Edale for the start of the Pennine Way. It’s less than three miles, but there’s the Mam Tor ridge in the way, crossed at the major path junction of Hollins Cross. However signs tell that in the days when Arkwright ran a mill at Edale, the mill women would walk from Castleton and then back again every day bar Sundays, no doubt seeing the hour’s walk as just a necessity to put bread on the table. So, crossing the last few fields to the campsite with the rain truly back, it would not be right to complain. At all.

Looking back to Hollins Cross from Edale

Though it was never the plan to follow the Pennine Way slavishly north, its course and mine inevitably intertwined as I made my way on. And its classic first stage, across country which I walked almost every week in the 1970s, was far too good to miss – especially on a day of improving weather such as this.

The southern part of the Dark Peak has two great massifs, Kinder and Bleaklow, and this walk takes in both, though keeping to the edges of the former rather than tackling its bog-ridden centre. I’m old enough though to remember when the Pennine Way took the Grindsbrook Clough straight out of Edale, rather than starting west and then taking Jacob’s Ladder to Kinder Low as it does now. 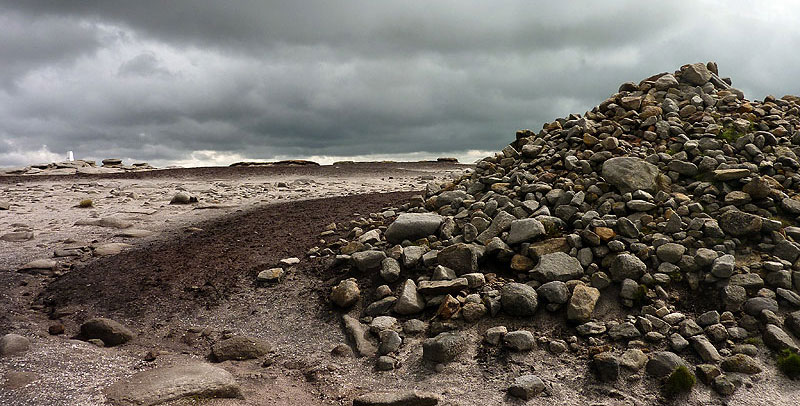 Both the original and current courses of the PW are fine routes of course, and it has to be said that the present version allows great views west and north from the edge of the escarpment all the way to the meeting point at Kinder Downfall. Finally looking back from Ashop Head, the bulk of Kinder presented its whole solidity – a memorable view. 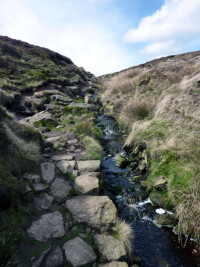 Alas, the Way from Mill Hill to the Snake Pass is just a near-level, near-straight trudge on flagstones these days – probably inevitable, given what the passage of feet would by now have done to the peat by now. There is little such engineering from the Pass to Bleaklow, thankfully, and Hern Clough in particular is a delight to ascend, bringing me right back to the bog-trotting days of my 20s.

Perhaps it helps too that Bleaklow is much emptier than Kinder – on this pleasant Saturday, the former was humming, whereas apart from disturbing a couple of picknickers in the aforementioned Hern Clough I saw not a soul until I arrived in the valley bottom of Longdendale and its main road, power lines and abandoned railway.

The descent into the dale is something of an anti-climax, but sheltering from a rogue hail storm I had the considerable bonus of a perfect rainbow encircling the hillside beyond.

To my sister Kerry’s house. A Pennine Way start, with some good views back to Crowden early on as I climbed towards Laddow Rocks.

Looking back to Crowden

The PW leads on to Black Hill, once notorious for its peat sludge but now tamed by flagstones – though I remember crossing it baked firm in the heatwave summer of 1976. Black Hill was far busier than Bleaklow yesterday, surprisingly, and at the summit trig point I had the chance to relive this memory with a group of passing walkers.

North from Black Hill, the Way has been diverted again, going via Wessenden Head instead of north-westerly, losing height and adding miles as a result, but the new version was better for me – though ironically, it too has a diversionary alternative, if the crossing of Dean Clough should be impractical in spate. 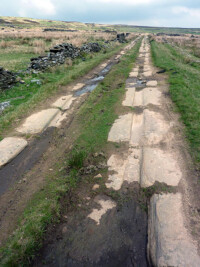 My guideline was the smaller Reap Hill Clough, just north, where I expected to have to freelance a few hundred metres to join the Kirklees Way, but others have done this before, and a thin track led me quickly there. An old cart-track, deeply rutted by the tracks of old quarry wagons, took me up to the main road, and a pretty little track from there towards Meltham, though there’s a scruffy and steep section later, on the town’s outskirts.

Kerry joined me here as planned. I rather hoped to be able to dump my bag into her then partner Grant’s car, as the next stage would set off from Meltham so didn’t need the extra few miles of walking, but that was apparently not their plan. Never mind.

We set off by an old rail track, crossed into Honley Woods via the local tip, and then took a pretty but damp cow meadow into Netherton. A quick up here, and a steep little lane took us down into Armitage Bridge, just a few yards from a house with a proper roof. 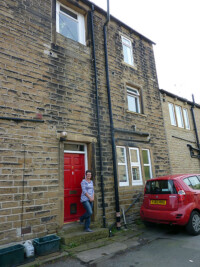 Three out of four nights were on campsites, all perfectly good. Lathkill Dale is on the edge of Monyash, so close enough for the pub. Edale has two large sites: I used the slightly smaller Fieldhead site run by the National Park, but chose a particularly wet field. Perhaps my favourite of these three sites was that at Crowden, with a cheery host and a convenient shop. What a shame though that the YHA have closed the hostel nearby.

And the fourth night? My sister’s house, best of all of course.

I broke the Limestone Way at Matlock, which has a rail link. Returning, I saved myself an uphill walk by a local bus to the hamlet of Upper Town. Armitage Bridge has buses to Huddersfield, but my sister gave me a lift to Mirfield for one of its occasional direct trains to London – Huddersfield has plenty of trains, they just don’t (as of 2021) ever go to London.