Across Scotland: south to north

Unlike Wales, Scotland isn’t easy to get to if you are a Londoner, but it’s worth the effort. England and Wales have treasures both secret and famous for the walker, of course, but the sheer size of wilderness and challenge in Scotland dwarfs both.

Start was the south-easternmost point, at the border north of Berwick, where I was to complete my cross-England walk in April 2016. Finish was the north-westernmost point Cape Wrath, so no boring bits along the A9 to John o’Groats. Since my walk, a John o’Groats Trail avoiding the road has been developed, but it wouldn’t have changed my mind. Cape Wrath is about the most evocative name there can be for the end of an undertaking such as this, and one I had toyed with for as many years as I can remember.

Quite apart from the difficult terrain, there are two, linked, great challenges for a Londoner in crossing Scotland a bit at a time. First, there’s no guarantee that it’s practical to travel up from and down to London at all easily. Second, you can’t be certain of ending a day at a place where anybody actually lives. So careful route planning is essential. And, if you don’t have the skills, you need to attain them. Which I did.

In 2007, I headed up the coast to St Abbs, tracked over to the Southern Upland Way, then crossed the Lammermuirs. The following year I rejoined the coast at Longniddry and then headed through Edinburgh by cycle paths and the Union Canal to Falkirk. 2009 saw me complete the lowland section by continuing along the canal system to Kilsyth, pass through the low hills of the western Campsies, cross the Forth, and finally take a route through the Menteith Hills to the small town and tourist hot-pot of Callander in the Trossachs.

The high hills were only a step away now, and in 2010 I crossed Corbetts, including Ben Ledi, then Munros through Breadalbane via Killin and Glen Lyon to Rannoch, where my old friend Dave Travers met me. We headed off to Benalder cottage bothy for some munro-bagging before crossing over to Corrour, and the most remote railway station in Britain. This set me up in 2011 to cross the Lairig Leacach and Great Glen, and hence join a variant of the Cape Wrath trail to the Cluanie Inn.

Continuing in 2012, first of all I allowed myself a side-trip to climb Ben Nevis by the wonderful Carn Mor Dearg arête, and then resumed to cross the remote country north of Cluanie to Achnashellach station on the Kyle line. The following year, I continued through Kinlochewe to Oykel Bridge. I was back-packing now – aged 62, it was my first serious trip with a tent. That just left the magnificent final 80 miles through Sutherland, the focus for 2014.

The Trail is not a set path like the West Highland Way, more an opportunity to use one’s ingenuity to get from the southern end of the Great Glen to Cape Wrath.

It’s become something of a backpacker’s test in recent years, due in large part to the publication of an excellent Cicerone guide by Ian Harper in 2013. (There was an earlier edition, but the Trail’s popularity seems to have exploded after the 2013 version; this in turn has been replaced by a 2021 edition.) It’s the only Cicerone guide to a British trail where the stages are enumerated in days rather than hours.

There is no waymarking on the Cape Wrath Trail, and while Harper’s guide suggests a ‘main line’, there are several alternatives to it. Given the scale and scope of the Scottish Highlands, it’s perfectly appropriate to add one’s own variations if you wish. Indeed I’m quite proud of my Gairlochy-to-Tomdoun route, featured on the Lochaber and Great Glen page.

I used bothies and hostels to get me as far as Kinlochewe, but that’s not even half way up. The dawning realisation that my safety, not to mention my logistics, demanded that I learned to wild camp, put a whole new dimension to my quest to reach the Cape.

Each year’s walk has its own page (apart from Kintail and Wester Ross, two years in one), with full route information and map. Click the purple button to find out more.

Getting there – and back again

As far as the central belt, the London – Edinburgh rail line and the vaguely reasonable bus services along the east coast made travel to and from the walks fairly straightforward. The 2008 walk was reliant on the excellent local rail services into and out of Edinburgh.

Further north the Caledonian sleeper came into its own. One of the world’s great rail journeys, it is particularly valuable, time-wise, from Perth and north thereof. In particular, the train crosses Rannoch Moor to the splendid isolation of Corrour, where I picked it up in 2010 and returned in 2011. Achnashellach is on the Kyle line, and Oykel Bridge within hitching distance of Lairg on the North Highland line.

Getting back from Cape Wrath was another matter entirely. I stayed overnight at the wonderful Kearvaig bothy before leaving the peninsula, and then spent at night at the bunkhouse in Durness. Durness to London? Easy: bus, train, train, train, 13 hours. And it worked! The worst bit was seeing eight years of route planning flash by, as I passed the border point just a few hours after setting out. 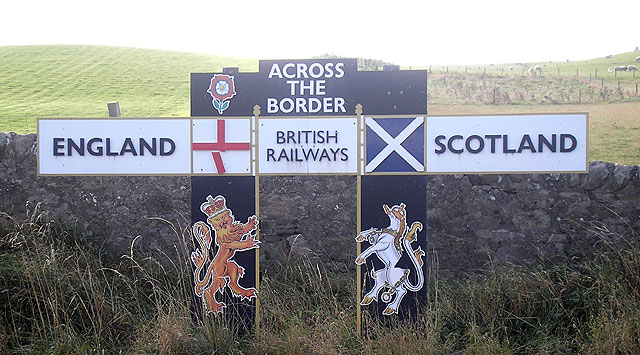 The border north of Berwick, as helpfully signed by British Railways long ago