Just like my cross-England walk, this walk starts with a stroll by the sea, though rather shorter than its Cornish equivalent. It’s a fine and varied coastline, and I had the benefit of good weather both days as I followed almost all of the Berwickshire Coastal Path to near Grantshouse.

From here I joined the Southern Upland Way to Longformacus, before crossing the Lammermuirs via their highest point (the distinctly scruffy Meikle Says Law) to the stage endpoint in the touristy village of Gifford. 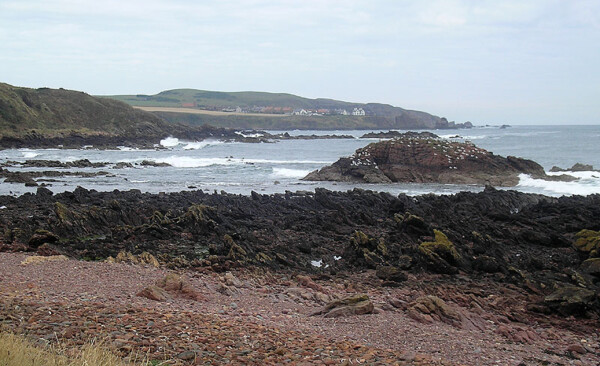 To keep this walk ethical, it had to be completely in Scotland. That meant jumping off the bus at Burnmouth and walking back to the border, though I found it would have been possible to have used the bridge at 973580. It was no particular hardship, on a beautiful afternoon. 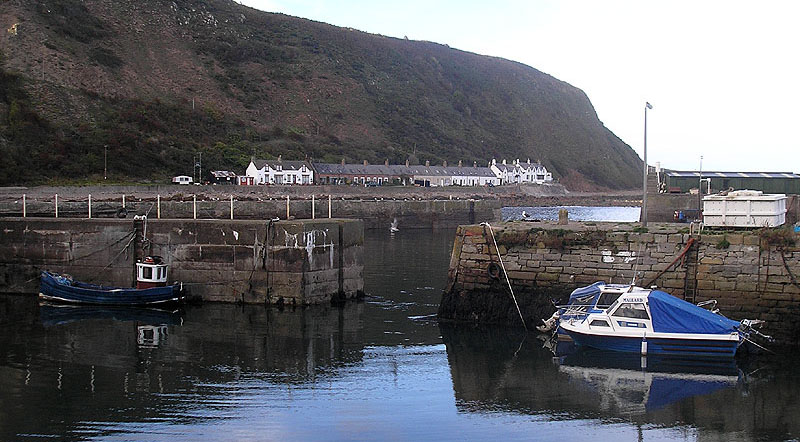 A great tragedy struck here in 1881 almost to the day, as 189 local fishermen lost their lives, devastating communities along the coast. They are commemorated in four sculptures by Jill Watson of those left behind, the first at Burnmouth, and others at Eyemouth, St Abbs and Cove.

The coast north of Eyemouth gets better and better, all the way to the village of St Abbs and beyond. Beyond the village, a fault line helps to creates the geological splendour around St Abbs Head. The sun chose to burst forth here, delivering a grand palate of blues, greens, reds and yellows. Mire Loch sits clearly within the fault. 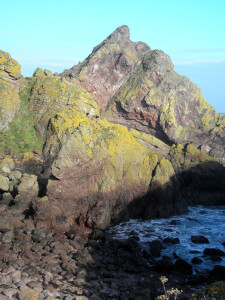 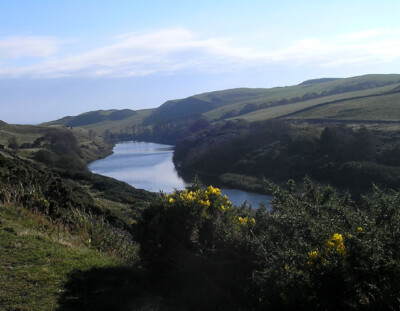 The coastal path had very recently been extended north of here, a welcome bonus, for this is a tough little section with plenty of ups and downs into steep valleys. You pass two mile markers for shipping – it’ll take you well over half-an-hour to walk between them, promise. Swinging inland at Dowlaw, my original plan has been to take rough tracks out by Old Cambus, but with a bus connection to make at Grantshouse I took the easy route of the road by Howpark. Alas, I got there too early for the pub.

The plan from Grantshouse was to join the Southern Upland Way. It’s little more than a mile north of the village, but it’s a mile along the A1 as it enters a narrow valley, and who would want to risk the traffic. Instead I cut north-west on a lane through Butterdean to pick up a track running through gentle countryside which joined the Way at Blackburn. I made good time and was early for my lunch at Abbey St Bathans. The little restaurant here is a beauty – it doubles as an art gallery, but even my commodious new Golite sack didn’t have the space for some of their beautiful seascapes – and the church was pretty in the autumn sunlight. 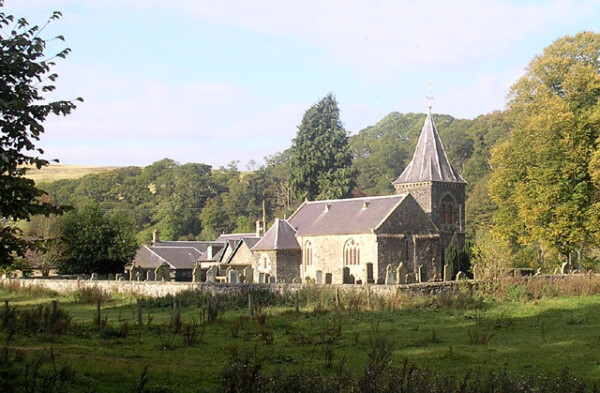 Black Hill is disfigured by wind turbines, and locals feared more would follow. The moor towards Longformacus is confusing, and I managed to lose myself on it, though with plenty of time in hand and good weather it was of no import. (When I came back, in the other direction, in 2016, I think I found out why. There are two waymarker posts just 20m apart on the moor, one clearly newer than the other. My guess it was added because, from the east, the older marker on its own did not give a clear direction to a slight rightish turn.)

The moor towards Longformacus

The next day was wild and remote, across the highest of the Lammermuir Hills. The start is easy, on tracks and lanes by the Dye Water until it encounters the pylon road, but northwards there is nothing clear on the map. As it happens, my host in Longformacus, a former keeper, told me of a scant path running from here by grouse butts, and this helped me make a start northwards. It peters out soon enough, and then it’s a case of keeping Wester Black Burn to the west and rising slowly to join the boundary fence in between Little and Meikle Says Laws. Trackless navigation, never a problem, unlike yesterday on the SUW!

(2014 update – while revising the maps, I saw that OS now shows a wind factory disfiguring the hills south of Meikle Says Law. So it’s hardly trackless now; instead, an absolute mess, I would guess.)

From the fence you are in East Lothian – a very walker-sympathetic council, I was to find. Meikle Says Law, high point of the Lammermuirs at 535m/1755ft, is a desolate spot with pretty much nothing to recommend it. Northwards, though, is a great cairn on the 504m Harestone Hill, and with landrover tracks encroaching there was less and less rough stuff to contend with. Harestone is a far better viewpoint than Meikle Says, the Lothian plain spreading before you, though limited by haze today.

The one benefit of landrover tracks is in descent; from the plethora hereabouts I chose the one to the west of Long Grain, as it gives good views into Hopes reservoir. From the valley it was all road bashing until the super little village of Gifford, barely a child of the hills at all.

Forward to the Lothians

The journey north was by train to Berwick-on-Tweed and then the bus to Burnmouth, but as noted above that meant I had to double the stretch from there south to the border. Gifford has (or at least had) a bus to the county town of Haddington; from there I took a bus to Dunbar for the train to Newcastle, where I met up with wife Barbara and son Adrian for a few days on Hadrian’s Wall.

At this time I was solidly a B&B walker. The first two nights were at the Bantry, above the fish and chip shop in Eyemouth – room a bit poky, and not thyen geared up for early breakfasts, but great fish & chips! Night three was in the very helpful Whinmore B&B in Longformacus, and in Gifford I stayed at the good Goblin Ha’ hotel.